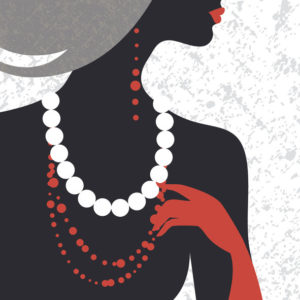 It’s the year 2020, which means it’s been one hundred years since the start of the iconic and fashionable Roaring Twenties era. During that time, costume jewelry became quite popular, most notably of the Art Deco style. If you have a piece of authentic costume jewelry from the 1920s, you could be in possession of a real treasure. Read on to learn about the characteristics that were common in costume jewelry from the 1920s, including Art Deco jewelry, so you can better analyze and understand the value of your own 1920s pieces.

The 1920s were a time to celebrate the modern independent woman, including shortening her hemline as well as her hair length. Bobs were tremendously in style, which means earlobes were exposed and in need of decoration. Long, dangling earrings became fashionable, but were only affordable to the wider population as costume pieces. During this time period, costume jewelry mimicked fine jewelry so every woman could feel she was wearing something sleek, delicate, and elegant. That means white metals and fake pearls were used frequently, as well as glass stones.

Long necklaces, especially pearl ones, were incredibly in fashion during the 1920s and were made even more popular by fashion icon Coco Chanel. Chanel opined that jewelry should be “like ribbons in a woman’s hands. Supple and flexible.” She advocated for women to wear several strands of long necklaces. Women would even wear necklaces that hung down the back. Anything to accentuate length, as was the general fashion at the time. It was also the Jazz age, a time where women would dance to Jazz music, and it was characteristic for jewelry to be long enough to move along with the women wearing them during these dances. Many of these necklaces were costume pieces, as that was what was affordable and accessible for many women in these years after the first World War.

Bracelets were in style, especially in the form of bangles, and women in the 1920s wouldn’t just wear one. They wore a stack of bracelets going up their arm, and the bracelets would usually make noise as the woman moved. Sometimes, a woman would take a long strand of pearls (or fake pearls) and wrap it around her arm several times to wear as a thick bracelet rather than as a necklace. Bracelets were also made out of plastic, wood, metal, and even bone. Many metal bracelets were inset with colorful gems in the Art Deco fashion.

Art Deco refers to a series of designs inspired by cubism that combined ancient Egyptian, Aztec, Grecian, and other styles from ancient cultures with a modern twist influenced by the age of modern machinery. The marriage of the ancient and the modern resulted in unique jewelry pieces with angles, spirals, nods to ancient architecture, and rich colors. One notable characteristic of Art Deco jewelry is that it is usually symmetrical, so if you have inherited a piece that you think may be Art Deco, check to see if each half of it is a mirror image of the other. Art Deco jewelry also often depicted images of items that are fast like cars, trains, airplanes, panthers, and gazelles.

If you have inherited costume jewelry from the 1920s, especially in the Art Deco style, you may have some valuable pieces. The only way to truly know their value is to get them appraised. The experts at Old and New Shop can evaluate your costume jewelry and offer you the best price you’ll find for them. We’ll help you make sure you’re getting the most for these valuable, historical pieces!

See What Our Clients Are Saying About Us